BOG OUT is back for the 2016 Brisbane National 4×4 show.  Wow! A whole 12 months since our very first expo. Actually, we didn’t think we’d even get out of Cairns last year! 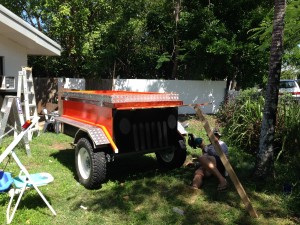 BOG OUT is manufactured near Cairns, 1,680 km from Brisbane (THAT’s 22 hours non-stop driving). We had 18 shows booked all over Australia’s east coat and needed to transport our stock in a purpose made trailer which also doubled as a 4×4 working display model.

So, Paul suggested cutting up and welding an old trailer because he needed a short-wheel base trailer.  It puts the wheel near the ‘front’ for easy demo, eg how easy it is to tie on a BOG OUT  and how the harness captures the spinning or bogged wheel and turns it into a winch.

But it’s cyclone season and it rained, and rained and rained. Undeterred, Paul continued to build his ‘ark’ under the family washing line until finally the Bog Demo 4WD-Trailer was ready and packed.  Running late, the paint was still wet for capturing flying insects but at least Paul was on his way.  So we thought… 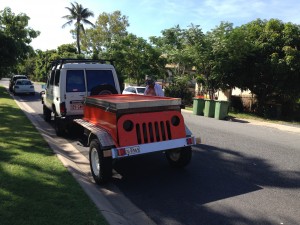 11pm, I get a call. The draw bar has snapped in half and Paul is stuck in a cane field in Innisfail (just an hour South of Cairns).  More flying insects not stuck to the paint!

Paul is a resourceful character (that’s why and how he invented the BOG OUT).  First light, he jacks up the trailer, saws through broken metal, zips back to Cairns – buys out the hardware store and returns to the paddock to furiously drill and mend everything except a lot of lost time.

Next stop was Brisbane whilst I communicated with the show organising special security gates to be reopened and our BOG OUT 4×4 Show was set up in the nick of time.

Paul flew to Brisbane this year. 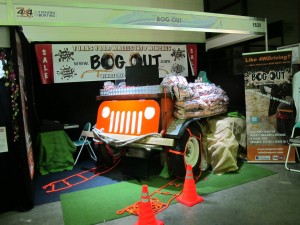 BOG OUT Got Me Out – Customer Story